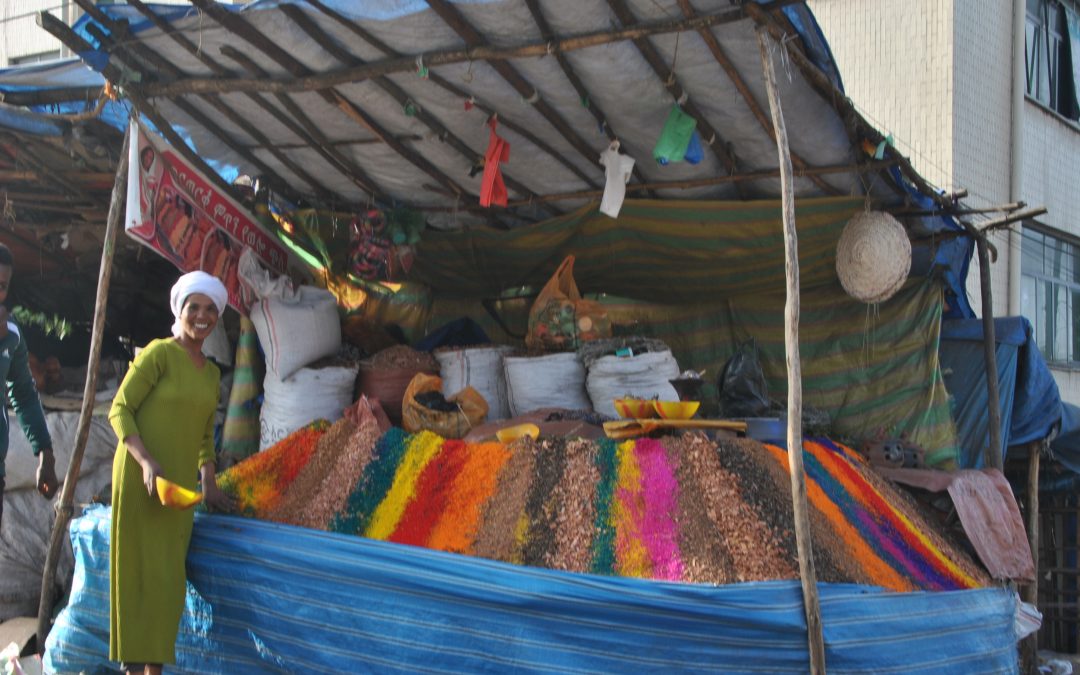 Again, we had the pleasure in visiting the project in Addis. There was more than onereason for that, as

Handing over the donations

Hanne and I had told about LmbC/Ethiopia in a nearby Y ́s Men’s Club, who at their annual donation sympathized with the idea of donating laptops to our 2 young women, now visiting University. As I regularly visit Dublin and having earlier established contact with a PC-seller, he was easily convinced to let me have 2 for the donated amount. To that we donated the bags for each girl. The photos show the 2 girls + Habtamu and Meghdes (boss + member of the staff), when the donation took place.

From our local sports club, we are asked to bring the tricots from a sport event, where there is an excess number. We visited LmbC during school holidays, and there was low activity. But still several children come at a daily base.

The North of Etiopia – our Impressions

Our other main purpose was a 3,500 km trip to the north, starting in Bahir Dar and Lake Tana, where the Blue Nile has its origin. Further on to Gondar, one of the old Royal towns and some magnificent buildings. The next days there was spent participating in Timkat, the most holly Christian eventin Ethiopia. And with more than 500.000 guests yearly, this was a great experience. From Gondar we were headed to Debark and The Simien Mountains, World Heritagelike the towns of Gondar, Axum and Lalibela. The mountains are birthplace for a great number of endemic animals, e.g. the Gelada monkey. Next goal was the old town of Axum, ancient site for Kings, and famous for the stelae and birthplace of The Queen of Shaba. Many of the places cannot be seen in one day, as you need to be aware of the long distances. Nearing the border to Eritrea both towns of Adwa, famous for the battle where the Ethiopian tribes under Emperor Menelik II beat the Italians (1895). Due to the exceedingly long distances we had an overnight in the small town of Hawzien, being able to walk around, visiting the rice dealer, the silk seller and similar, after having visited Adigrat on the border line. Hawzien is one of the most important towns, having camel caravans in with salt from the Danakil. The famous rock hewn churches of Tigray were just passed on our way to Mekele. The Maryam Korkor monastery can only be reached, by climbing 3 hours up. We did not. Mekele, the main town of the Tigrayans, a modern orientated industrial town. And from here we were headed to Alamata, the closest town to the Danakil Desert, one of the hottest deserts on earth. Our journey from there was the famous town, Lalibela. A world wonder, where we too were participating in their Timkat. The town is known for its rock hewn churches, and pictures explain this very well. There are more than 15 of that sorts of churches, built during the reign of King Lalibela. The Timkat in town ends on the top around Bet Giyorgis (Sankt George Church) when the priests are gathered.

The road to Lalibela is difficult and back again over Alamata to Woldia. This town will be one of the important ones, when the railway under construction from Mekele to Awash, southeast of Addis, then reaching Dire Dawa and Djibouti on the Addis line, constructed by the Chinese ca. 4 years ago. This new railway line will be a major achievement for the northern part of Ethiopia. The trip from Woldia passed Lake Hayk, a religious place in Ethiopian history, before arriving in Dessie. From here there is a good (only 1 day!) drive to Addis, and a nice stopover in Debre Berhan, a Christian place of Pilgrimage.

We will strongly recommend you visit the northern part of Ethiopia. And with our driver Tess was as always, a wealth of good information, safe driving and taking care of us. On the trip up north was my sister Birgit accompanying us.

And as the raisin in the hot dog end: The Danish Ambassador had invited to her New Years Party on January 31. An exceptionally good opportunity to promote the LmbC project. We will make a follow up later this year.